Tyler Reviews – Wes Anderson Hasn’t Even Reached His Final Form: The Visual and Narrative Banquet of The French Dispatch 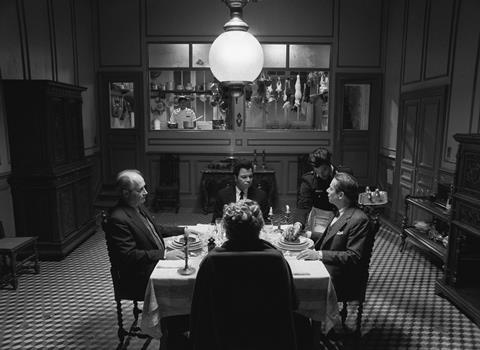 Bill Murray, in his now ninth role in Wes Anderson’s 30+ year filmography, plays Arthur Howitzer Jr, the editor of The French Dispatch magazine who rarely actually edits or cuts down any of his writer’s work. This seems to be a parallel to how collaborative artists approach Anderson himself now, a man who doesn’t need his vision edited down or any of his wild ideas trimmed back. Other reviews I’ve read of The French Dispatch use this parallel as a negative of Anderson, claiming that Dispatch is his most inaccessible and incomprehensible film to date.

The most commonly used example of a filmmaker with free rein and no one telling him no would be George Lucas in his making of the Star Wars prequel trilogy. Old George hadn’t directed a film since the original Star Wars back in 1977 when he sat down to begin production on The Phantom Menace in the mid nineties, and certainly hadn’t penned a screenplay on his own since. He was an idea man that was tasked with every creative decision involved with the making of three blockbuster films, and for better or worse, those prequel films are entirely George Lucas. Wes Anderson is more than an idea man, he is one of the great visionary filmmakers of our generation.

In the age of studios like Disney and Warner Bros own every important IP and are involved with every creative decision in the making of popular entertainment, we should cherish that we still have auteur filmmakers like Wes Anderson and Quentin Tarantino out there making whatever the hell they want. So what if Wes Anderson creates an overtly complex and strategic stop motion animation scene of sushi being made? So what if Quentin Tarantino wants to use up a half hour of his runtime showing Brad Pitt jamming to the radio while driving around 1969 Hollywood? That’s pure Anderson and Tarantino and I’ll eat up every second of it.

The French Dispatch is Anderson at his most multimedia. He’s played with animation, model work and aspect ratios before in his previous films, but I assure you, never like this. Dispatch is the story of the last issue of the titular magazine. It begins with an obituary that provides background into the publication, follows with a brief tongue-in-cheek travelogue, and then proceeds to tell three stories that delves into themes of what it means to make great art and what it means to experience great art while history and events change around you. The film is surprisingly mostly told in black and white in a full frame aspect ratio of 4:3. Anderson is known for his excellent eye popping color palettes, as well as the symmetry and preciseness of his shots. But here, he withholds this color from the audience, only applying it to brief scenes that are really heightened by it. The same goes for the aspect ratio. We can fully appreciate an artist’s master work, or Saoirse Ronan’s piercing blue eyes, or the decadent courses of a prison chef’s culinary delights when we abruptly switch to widescreen and color. Similarly, Anderson is not simply bound by the traditional rules of live action filmmaking. He may choose to tell part of the story as a play, or in a traditionally animated chase sequence inspired by The Adventures of Tin-Tin. An actor playing the young version of a character may trade places with the actor playing the older version of the character to show the passage of time. In order to link events of the narratives, the in universe writer may be giving a lecture about an artist or may be on a talk show recounting the events that inspired his article. It’s all simply delightful and innovative filmmaking and I find it a crime to just pass it off as another Wes Anderson whimsical fluff. Such care and precision went into every single frame of this movie, and in an age of grayish color palette, green screened, CGI superhero fests; I for one will take the time here to celebrate it.

I will contend though that it is a dense piece of narrative filmmaking that probably must be watched a few times to fully absorb all the art, filmmaking, narrative and nuances and is therefore not for everyone. As an anthology feature with this much substance, I felt a little disoriented moving on to the next story before fully digesting the previous one. I’ll be open and honest and admit that I had no clear idea what Timothee Chalamet and his student revolutionaries were protesting in the second segment or why Edward Norton had kidnapped the Commissaire’s son in the third segment, but that’s okay. Some films are meant to be watched and rewatched; that’s the beauty of them. In contrast, I had a clear idea of everything that was going on in Free Guy or Jungle Cruise, and while neither are terrible movies, I admit to not thinking about either of them at all since leaving the theater. That’s also okay. Some entertainment is meant to be for entertainment’s sake and can be completely disposable. There’s room for both and I don’t think some people realize that. Not every movie needs to be a cinematic thought piece and not every movie needs to be a big dumb blockbuster. This isn’t me trying to be snobby. I loved big dumb Malignant more than a lot of films this year for goodness sake. It’s just that The French Dispatch is being written off as just another arty Wes Anderson film and, why that is understandable to a certain degree, I for one will be coming back to the film again soon, hungry for more.