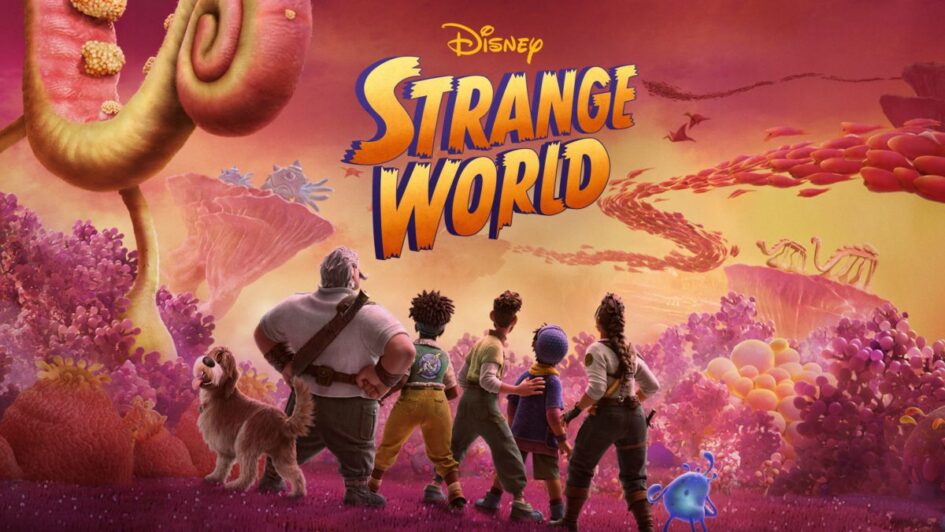 When I first saw the trailer for Strange World, the music stood out to me more than anything. Trailer music has a habit of being better than the actual score for the movie, so I wanted to see if this movie would fall into the same category.

Strange World tells the story of Searcher, voiced by Jake Gyllenhaal, being forced into an adventure to save their city. Throughout the adventure, Searcher also deals with family generational trauma, which has already been done in the two previous Pixar films, Turning Red and Lightyear. I found it hard to invest in this aspect of the story due to its repetition. Don Hall, the director, styles this movie after Indiana Jones style adventure films. Everything from the transitions, music, backstory, and characters followed this format, but the originality showed through with the world-building.

Disney never fails to produce amazing animation, but they went the extra mile this time around. I could not get over how realistic the hair on each character or the fur on the dog looked. The attention to detail was some of the best I’ve seen in animation. On a more macro scale, the landscapes were breathtaking. The colors, creatures, and plants all felt completely original and different from one another. Many scenes in the movie were so beautifully done they could be in an art museum. The animation was done at such a high level, it was easy to relate to the character’s awe when they discovered new areas, making me feel like I was right there with them.

I’m glad to say the score built upon the music from the trailer. Henry Jackman showed heavy inspiration from older adventure movies but added a twist to make the music more fitting to the setting. I would have liked to see some experimentation with uncommon instruments, as I think done correctly it could have really added to the alien nature of the world. However, Jackman does a good job of making each new setting feel unique with the different musical choices while maintaining the original theme.

The plot was nothing special for me and just felt like it was taking us from cool landscape A, to cool landscape B and so on. Up until the end of the movie, the stakes don’t feel very intense. Part of this was due to the characters not knowing what they were searching for, meaning the plot could go wherever it wanted with no consequence. Without saying too much, there is a twist in the end that made everything leading up to it much more interesting. In most Pixar movies, the endings feel very predictable, and I thought I had this one all figured out, but I was truly surprised when the movie was over.

Overall, I really enjoyed watching this movie, it was refreshing to have a Pixar movie trick me. But as mentioned before, this movie falls short in the emotional stakes, making it almost forgettable. The animation quality kept me invested more than the characters did. Could you wait to watch this movie on Disney Plus? Yes, but I recommend seeing it on the big screen so you can fully experience how stunning the visuals are.